Lupe is a true genius in his own regard. “Adoration Of The Magi’ track from ‘Tetsuo & Youth’ album is definite proof on that. While you will be busy gazing at the stripper dancing around a pole and strip her clothes down, you just might miss the incredible meaning behind this song.

‘Adoration of the Magi’  is the name traditionally given to the subject in the Nativity of Jesus in art in which the three Magi, represented as kings, especially in the West, having found Jesus by following a star, lay before him gifts of gold, frankincense, and myrrh, and worship him, says Wikipedia.

Buy “Adoration Of The Magi” Single on iTunes / Amazon

This music video is a treat for your ears as well as your eyes. If you want the viewing pleasure , keep watching. If you want to listen, close your eyes and listen. Either way, it’s so good.

If you look carefully, you will see a bigger picture than just a stripper dancing around a pole. There’s a hidden message here. You can see a variety of people watching the stripper. There’s a nun, a policeman, someone that looked like a student and so on. They are all sinners in some way-whatever clothes they wear over them.

The hook of “Adoration Of The Magi” has everybody talking;

And it has an epic meaning or a referencing behind it. Lupe Fiasco has played an incredible game here on the hook, by referencing to six classic music albums by the best in the game. 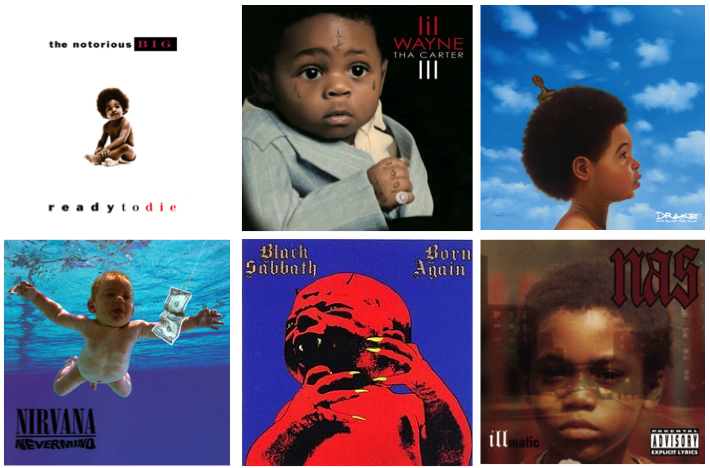 The hook on “Adoration Of The Magi” throwsback to 6 classic albums of our generation via some clever wordplay. [Image Credits: Genius.com]

Notice how Lupe ended each of the above six lines with ‘you just a baby’ phrase and look at all these six album covers. They all have babies on them. And all of those lines were inspired by the album covers.

If you ask me, Lupe has done some serious wordplay here. (Starts a slow clap…)

Genius.com has a full berakdown of the lyrics of the track and a definition of the meaning of it.

“Adoration Of The Magi” is full of wisdom. Sometimes even mere fans cannot interpret them. He says this on the song too.

You’re so smart
You’re like, a contemporary museum of art

A museum is a place to display ancient valuables. But Lupe’s work is such, but only they are relevant to the modern world, hence ‘contemporary museum of art’. Lupe does art, like no one else can.

Why not add your own opinions about the song, video or the lyrics of “Adoration Of The Magi” in the comments below? Let’s start a discussion for this maestro.