Maroon 5 – She Will Be Loved (Lyrics Review and Song Meaning)

“She Will Be Loved” by Maroon 5 is one of those songs that you could listen as a teenager and as a grandparent and still enjoy alike. It is one of those timeless songs that has been around since 2002, a single from Maroon 5’s first studio album ‘Songs About Jane.’ It is fair to say that this song put the group on the map and still defines them as a band to date.

“She Will Be Loved” is a complicated song about love. You will realize this when you watch the video.

Watch “She Will Be Loved” Music Video

Download “She Will Be Loved” Single on iTunes and Amazon

Lyrics Review and Song Meaning of “She Will Be Loved”

Some argue the song is about being stuck in between two loves as suggested by the music video. Some also sense the girl in the story is a prostitute. However, we will get into some lyrics breakdown and conclude the meaning of the song at the end.

She was young and beautiful and she was already in trouble for her age. This could be referring to the lifestyle this girl lead, allowing people to take advantage of her. She might have been naive and not seen the world much. This resulted in her being used and taken advantage of at a very young age.

“He” here would be referencing to the singer of “She Will Be Loved,” and the song says he was always there for her. But little did she notice of that. She was always in a “relationship” with another. He had no chance to rescue her.

I drove for miles and miles
And wound up at your door
I’ve had you so many times
But somehow, I want more

He tried to escape from her (because it was not working out for him?), but somehow ended at her doorstep everytime. He did manage to get her at times, but she was never to be tamed. So he couldn’t have enough of her.

Looking from the angle that he is talking about a prostitute, the song makes a lot of sense too. She is young and beautiful and she had made a wrong decision in her life and is a prostitute now. She was always working and was with other men. Even when he says he has had her so many times, it could be refering to a paid sexual relationship.

Chorus of “She Will Be Loved”

The guy confesses his love for the girl. He is willing to sacrifice his time and devote his life for her. She is broken in so many ways-even her smile says that. But he wants her. And he will love her, no matter what.

If he was talking about a prostitute, these lyrics would still refer to an undying love for a broken soul. She hates her job, but she has no choice now. She might have made some bad decisions when she was very young and those lead to her being a prostitute at 18. After sex with this guy, he wants to ask her if she wants to stay for a while with him, just talking and watching the rain. 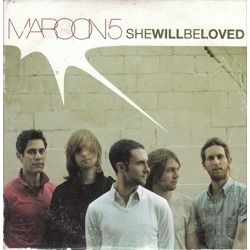 “She Will Be Loved” single artwork by Maroon 5. Picture credits: Genius.com

Tap on my window, knock on my door
I want to make you feel beautiful
I know I tend to get so insecure
Doesn’t matter anymore

Adam Levine wants this girl to reach out for him. He wants her to visit him and he will be there to welcome her into his home and heart. He wants to make her feel beautiful again. She’s been used by so many people, that she is probably immune to love now. He wants to change that.

The singer gets insecure about her past. She has been with so many people and she has had a rough teenage life. If she was a prostitute, the singer could be referencing to being insecure about all the men she has been and is being with now. But the singer is willing to forget all of that, if she gives him a chance to let him in.

Life is never rainbows and butterflies-it is hardly that no matter how perfect your lives are. “She Will Be Loved” emphasizes that loving a broken soul is not going to be a smooth ride. He admits that even he is not perfect. But compromising on little things and building a trust and understanding is what moves a relationship along and grows as a couple.

The singer says his heart is full of love and the door is always open for her to come in.

She is used to hiding from love, but the singer says he knows why and he is ready to make her feel loved again. He knows her life in and out-or so he thinks.

I know that goodbye means nothing at all
Comes back and makes me catch her every time she falls, yeah

These two have been on their breakups and makeups so many times that it doesn’t even mean anything now. Or the singer is trying to say that saying goodbye is useless, because he always comes back to her. This agrees with the next sentence that says, that he will be there to catch her every time she falls.

Outro of “She Will Be Loved” Gives Feels

Adam Levine’s soothing voice fades out when he sings the outro of the song. He emphasizes that he will be there for her, if she lets him in. And the last line of the song kind of wraps up her response to all of this, which is a strong rejection from her side. Maybe she feels unworthy of love, maybe she can’t love. Whichever it is, she is trying so hard to not be with him. This will be a never ending uphill battle.

Is “She Will Be Loved” about a girlfriend or a prostitute? Quite difficult to say. But if you weigh the factors on a scale, I would say “prostitute” makes the song easier to grasp. But that does not mean the song is in-fact about that.

This wraps up our lyrics annotation of “She Will Be Loved” which is one of our favorite songs from the 2000s. We enjoyed breaking down the lyrics of the song and we hope you enjoyed reading the analysis as much as we did.

Got any ideas about the song that we missed? Think the analysis should be different? Or do you have any other opinions of the lyrics of the song? Please do comment all of them below and we will make it a discussion.