Drake – In My Feelings (Lyrics Review and Song Meaning)

“In My Feelings” appears in Drake’s new album ‘Scorpion’ and is possibly the most viral song in the rapper’s career yet. Among some of the hits like “Gods Plan,” “Nice For What” and “I’m Upset,” this new viral sensation is climbing up the ladder.

After being released on June 29th as a single, “In My Feelings” debuted at #6 on Billboard Hot 100 Chart. However, TheShiggyShow took it upon himself to dance to the hook of the song and it spread like wildfire on all social media. Ever since, the song has blown up on social media with everybody out there trying to imitate TheShiggyShow and do #TheShiggy to #InMyFeelings challenge. Due to this massive popularity in streams and radio play, “In My Feelings” jumped to #1 spot on Billboard Hot 100 just a week after the release.

“In My Feelings” is a heartfelt statement by Drake questioning if the members of the City Girls group still love him and remember him. The song is an upbeat dance track, much like it’s counterpart, New Orleans bounce genre, “One Dance.” The song also samples “Lollipop” by Lil’ Wayne, “Smoking Gun” by Magnolia Shorty and also includes vocals by the City Girls.

Listen to “In My Feelings” by Drake

Download “In My Feelings” Single on iTunes and Amazon

Lets look at the lyrics of “In My Feelings” and try to understand what Drake is really feeling and who these girls are.

TrapMoneyBenny is one of the producers of the track, along with BlaqNmilD. This marks TrapMoneyBenny’s first collaboration with Drake, whereas BlaqNmilD was a producer in “Nice For What.”

There are two variations of choruses in the song and the only thing that change in them are the names of the girls Drake is referencing to. Drake shouts out to ‘Kiki,’ ‘KB,’ ‘Resha’ and ‘J.T.’ The chorus talks about Drake missing these referenced girls and asking them if they still love him and he is always down to hang out with them.

Despite wide speculations by fans and theorists, there is no direct proof of who “Kiki” or “Keke” or “KB” are. However, there are some hints that may reveal who these people are or is.

For the longest time, Drake has professed his crush for Canadian TV personality Keshia “KeKe” Chanté. Check the below clip where Keshia Chante sits down with Drake on ‘106 & Park’ show.

In April this year, Keshia Chante released an interesting Tweet.

We have no clue if she is talking about “In My Feelings” or another track from the album or even about Drake’s music. But there is a pretty strong line of dots that can be easily connected.

She also Tweeted the controversial lyric from “In My Feelings” adding fuel to the speculation wildfires.

According to the grapevine, Drake and K’yanna Barber were romantically engaged back in late 2017.

While the debate on discovering the real “Keke” and “KB” shall continue, we encourage you to drop in your own suggestions.

In the first verse, Drake goes on to rap about his authenticity even though he has made it big in the industry. He says he still stays true to himself and that he might even be dead soon. Drake says that he has been ‘going off’ or being massively successful and this hurts his haters. So his enemies might be trying to take him off the game soon enough.

Drake also raps about Champagne which is a reference to his Instagram handle ‘champagnepapi.’ He also mentions Hennessy as an icon of luxury and serious business.

Drake shouts out to Jennifer Lopez’s hit single “Jenny From The Block” which speaks about who she stays humble even though she is big and successful in the music biz. This is the same thing Drake is trying to rap in the song.

The second alteration of the chorus of “In My Feelings” shouts out to ‘Resha’ and ‘J.T.’ These two girls aren’t as mysterious as the other two in the first chorus.

J.T. and Yung Miami (AKA Caresha) are a rap duo named ‘City Girls.’ They also sample on the song with Magnolia Shorty. 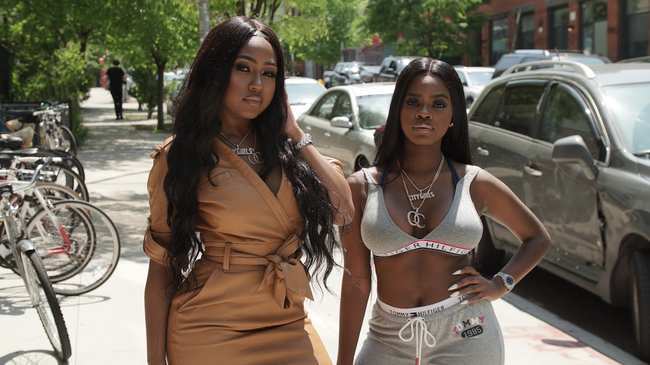 J.T. and Yung Miami (Caresha) from “In My Feelings” by Drake

The outro skit of the song is a real incident captured from  Atlanta Season 2, Episode 7: “Champagne Papi.” In the scene, Zazie Beetz attends an NYE party at Drake’s house and says these lines to gain some Insta popularity. However, Drake is out of town and her hopes fail.

“In My Feelings” not only has a catchy beat and a hook, but it also encompasses an entertaining backstory. This makes the song stand out from the rest.

The #InMyFeelings challenge has undoubtedly pushed Drake’s luck to the pinnacle as he reigns the #1 spot on several international charts yet again after “One Dance” and “Nice For What.”

Let us know what you think about the song, lyrics and the girls mentioned in the song. Do you agree with us?

Also, make sure to share this article with your friends and teach them about the infamous “Keke” and “KB.”

Full Lyrics to “In My Feelings” by Drake

Read “In My Feelings” by Drake on Genius