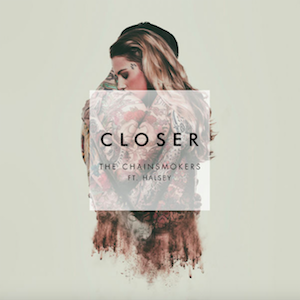 Single artwork of “Closer” by The Chainsmokers Ft. Halsey

“The song is sort of comical in nature, we wanted to make a feel good song about meeting your ex, falling for them on a physical level and them remembering all the horrible truths about why it didn’t work out. So hopefully the lyrics evoke some sort of emotional connection to people but we want people to have fun with it.”

Watch the music video for “Closer”

Over the past week the single has accumulated the highest digital sales, highest streaming and highest airplay gains. That is evident enough to how popular this song has got.

The lyrics to “Closer” are quite simple and straightforward

Verse 1 is sung by Andrew Taggart.

Hey, I was doing just fine before I met you
I drink too much and that’s an issue but I’m OK
Hey, you tell your friends it was nice to meet them
But I hope I never see them again

The singer gets into a confessional mood here. He admits that he drinks (alcohol) too much and most of his relationship issues can be traced back to his alcoholism. But he is OK-he was OK too, until this woman walked into his life. He was a happy alcoholic before.

The singer has met the girls’ friends too and he has no intention of seeing them ever again. Maybe they met at a bar and the guy did something so horrible that he has no chance with this girl (or her friends) ever again.

I know it breaks your heart
Moved to the city in a broke down car
And four years, no calls
Now you’re looking pretty in a hotel bar
And I can’t stop
No, I can’t stop

The couple had broken up and the girl had moved to the city to follow her dreams. They were not financially stable, and hence the reference ‘broke down car.’ After they moved along they had no communication with each other. I do not know what her dream was (but it sure wasn’t being a barmaid), but now she is a barmaid in a hotel-pretty and financially stable. And the guy just can’t control himself.

The Chainsmokers released the perfect reasoning behind these lyrics of “Closer.”

Chorus of “Closer” is performed by Andrew Taggart

These lyrics of “Closer” by The Chainsmokers clearly explain the hookup situation the artists spoke about in the lines before. But there are a few important points to note here.

They are having sex in the backseat of the girl’s Range Rover, which the singer says she can’t afford. So it’s either her parent’s money or she is a gold digger. The girl has got a tattoo on her shoulder. All signs lead to calling this girl a spoilt teenager.

The reunion between the exes had made them feel like old times. They have not grown up at all. They are the same reckless teens back from the village.

From verse 2 of “Closer” Halsey joins in

You look as good as the day I met you
I forget just why I left you, I was insane
Stay and play that Blink-182 song
That we beat to death in Tucson, OK

The girl is flooded of memories with him from the past. To her, he has changed a little, and still looks as good as she can remember. Now her mind starts to wonder-did she make a mistake? She cannot remember why they broke up. It has been so long (4 years minimum), and she can only recall the good times.

Andrew Taggart says that they were listening to “I Miss You” by Blink-182 when they were writing “Closer”, so why not pay some homage in the song!

I know it breaks your heart
Moved to the city in a broke down car
And four years, no call
Now I’m looking pretty in a hotel bar
And I can’t stop
No, I can’t stop

Halsey says she looks pretty in a hotel bar-good, we have not confused the two persons.

Both Andrew Taggart and Halsey join in on the final chorus of “Closer” which is an amazing harmonization of vocals.

“Closer” by The Chainsmokers is a gift to all those who have and miss their exes. And like Alex Pall wishes, hope this song reminds the exes why they broke up with each other in the first place and will not do the same mistake done in the song.

Catchy lyrics, amazing vocals and an electro-dance beat of rarity has helped “Closer” be one of the top singles in the world right now. It is quite clear that the track will hold on to it’s throne for a few more weeks.

Watch The Chainsmokers and Halsey Perform “Closer” Live at 2016 VMAs

We would love to know what you are thinking about “Closer” by The Chainsmokers featuring Halsey. Was our lyrics explanation to your satisfaction? Is there something more you would like to add? Is there a mistake in the lyrics breakdown? Let us know and we will make this a conversation.