The newly released “Look What You Made Me Do” music video by Taylor Swift tells a serious story if you look close enough. There are hint, jabs and shots at several things surrounding Taylor Swift and some are very apparent. This is an attempt to decode the music video.

Start of the video is a graveyard where Taylor Swift wakes from the dead. The makeup work is on point and we feel like watching an episode of The Walking Dead. In this scene Taylor is wearing a long dress-blueish and this symbolizes that Taylor Swift is waking from burying the old Taylor.

Then she resurrects in her jewel-filled and snake infested throne room. She is a snake queen now. The story of the snake and Taylor Swift runs years back. But now she is embracing what the haters say, rather than hiding herself in a room and pretending nothing is happening. She owns the snake comments and there’s nothing the haters can do now. The next scene shows Taylor Swift in glamorous clothing and bling-ed up, crashing in a gold Lamborghini. The tiger on the front seat could mean that she has a new ferocious side unlocked to her. Or this could be a clear reference to “Starboy” video by The Weeknd, in which he rides with a black panther. “Starboy” video is all about his star power and luxuries and Taylor’s diamonds and bling worn in the car could be a clear reference to this. As far as we know, there is no bad blood between The Weeknd and Taylor Swift.

Also, Taylor uses this scene to hint at the media. She is in a dangerous car crash and the media just wants to take pictures and cover the story. None of them helps her. That is how heartless the media can get. Taylor Swift wants to take on the fact that she is being called “crazy” by her haters. “Gotta long list of ex-lovers, they’ll tell you I’m insane…” And who else is better to portray female-crazy than Harley Quinn. So Taylor adopts two Harley Quinn signature scenes to portray “crazy”.

First, she locks herself in a metal bar cage and swings from a rope. Remind anyone? Then she feasts inside the cage-she has a wine glass in her hand where Harley Quinn just had a cup of tea.

Then, Taylor Swift shows a robbery scene and she is handling a baseball bat. Remember Harley Quinn in Suicide Squad? 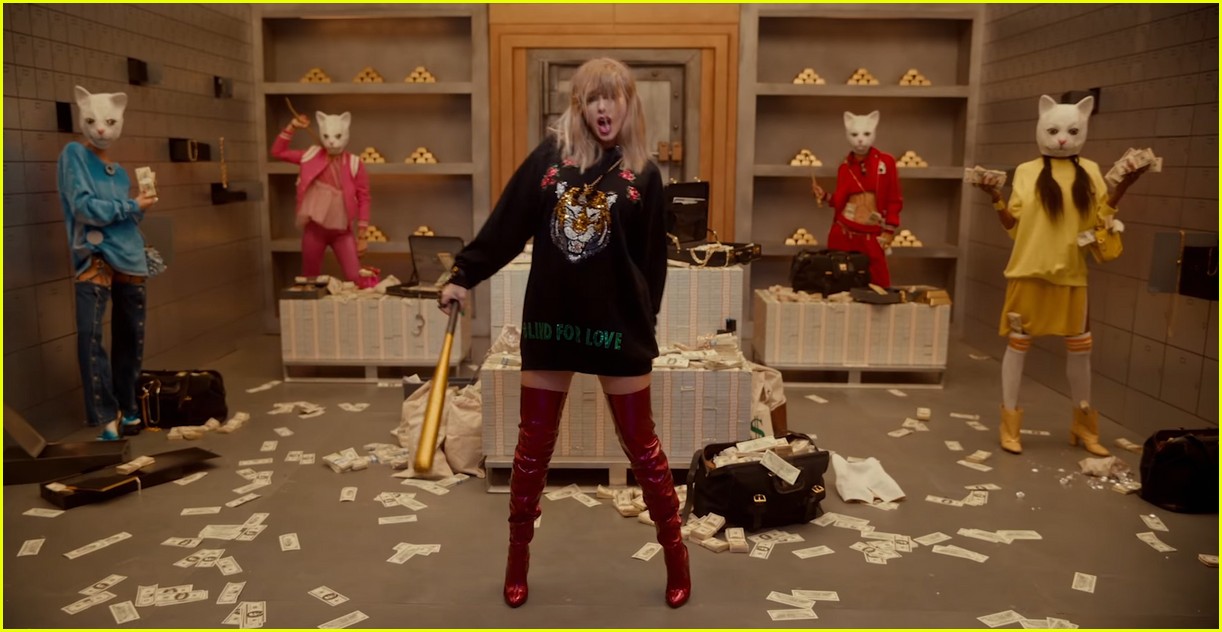 “Look What You Made Me Do” music video then shows Taylor Swift in bondage costumes and equipment. This scene should come from a position of power, as we are not aware of her sexual orientations to make a more personalized judgement. She is holding a whip which could be to punish her haters.

The last time we saw Taylor Swift in bondage gear was in “Bad Blood” music video.

Then the video shifts to a mansion which looks quite like the one from “Blank Space” music video. But the person is completely different now. Her backup dancers look like servants and they are all wearing “I Heart TS” t-shirts.

Then the “Look What You Made Me Do” video takes us to another unique scene. Taylor Swift is seen to be standing on top of a pile of ‘Taylor Swifts,’ or more like her former personalities. These old Taylors are crying and trying to get to the new Taylor, but they are failing as the new Taylor overpowers all of them. 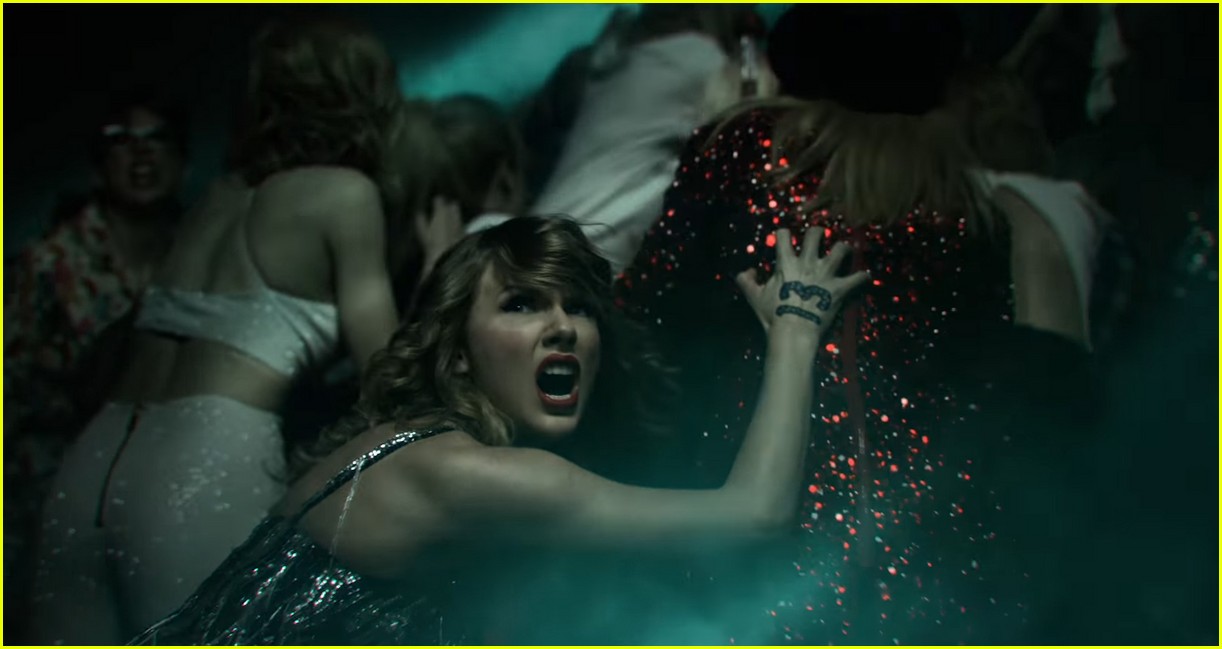 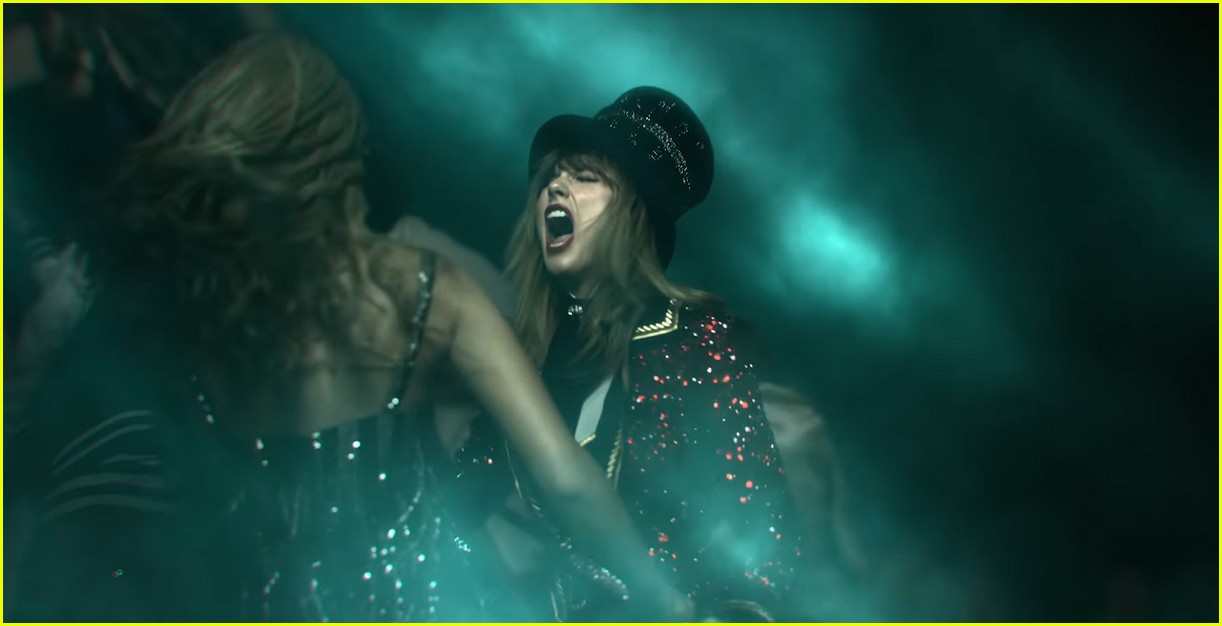 Then we arrive at the final scene of LWYMMD video, where we see all of the former Taylor Swifts lined up inside a hangar with a supersonic jet in the background with the album name ‘Reputation’ spray painted on it.

We see Taylor Swift from Taylor Swift era, Fearless era, Red era, Speak Now era, 1989 era and the newborn Taylor from Reputation era. The highlight of this shot is Taylor Swift holding the Moon Man award presented by MTV VMAs-taking a direct hit at that turn of events in 2009 VMAs that lead to all of this. You can see the resemblance in the below pic.

So, there it is, a full roundup of all the events and scenes and hints and hits by Taylor Swift from “Look What You Made Me Do” music video. We think this is a brilliant video. Taylor Swift says that this era will be about resurrection from being trampled and taken advantage of. In that case, this is a very good start.

What do you think about the “Look What You Made Me Do” music video from ‘Reputation’ era? Your kind of pill, or difficult to swallow? Let us know in the comments below and if you have your own interpretations of the video, do let us know. We will talk about it.