MTV’s Video Music Awards for 2017 unfolded last night with a lot of action and tension. There were some clear winners and sour losers at the VMAs last night. Taylor Swift unveiled her latest “Look What You Made Me Do” music video at the ceremony and Katy Perry performed her latest hit single “Swish Swish” with Nicki Minaj. Among these eventful occurrences, the Moon Mans were given away by the host Katy Perry, and she called Kendrick Lamar to the stage 6 times. Take a look at the rest of the winners at 2017 MTV VMAs below.

Although it was rumored that Taylor Swift would be present at the award ceremony, it was not to be. 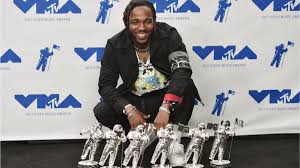 Kendrick Lamar with his 6 awards from MTV VMAs 2017

What did you think about the winners from the night? Fair judgement? Or did your favorite artist was wronged? Let us know in the comments below.