Justin Bieber seems to be finally settling down with a true love. After a lengthy season of going back and forth with singer Selena Gomez and some supermodels, JB seems to be truly happy with Hailey Baldwin to settle down once and for all. Justin Bieber proposed Hailey Baldwin in the Bahamas and professed his true love in a lengthy Instagram post.

Model Hailey Baldwin and Justin have been spotted together for several months back and they made this intimate event public, as the media got caught of the news.

Justin Bieber and Hailey Baldwin in the Bahamas

Justin Bieber intended to keep the news very low-key until eager fans spotted the massive ring on her finger. Once this little news got carried away, it was impossible for the couple and their parents to keep this a secret anymore.

Justin Bieber Takes to Instagram to Announce His Engagement

Was gonna wait a while to say anything but word travels fast, listen plain and simple Hailey I am soooo in love with everything about you! So committed to spending my life getting to know every single part of you loving you patiently and kindLY. I promise to lead our family with honor and integrity letting Jesus through his Holy Spirit guide us in everything we do and every decision we make. My heart is COMPLETELY and FULLY YOURS and I will ALWAYS put you first! You are the love of my life Hailey Baldwin and I wouldn’t want to spend it with anybody else. You make me so much better and we compliment eachother so well!! Can’t wait for the best season of life yet!. It’s funny because now with you everything seems to make sense! The thing I am most excited for is that my little brother and sister get to see another healthy stable marriage and look for the same!!! Gods timing really is literally perfect, we got engaged on the seventh day of the seventh month, the number seven is the number of spiritual perfection, it’s true GOOGLE IT! Isn’t that nuts? By the way I didn’t plan that, anyways My goodness does feel good to have our future secured! WERE GONNA BE BETTER AT 70 BABY HERE WE GO! “He who finds a wife finds a good thing and obtains FAVOR from the Lord!” This is the year of favor!!!!

This caption by JB is quite unexpected of a man of the controversial past he had. However, by the power of love, he seems to be a changed man-a better man.

Justin Bieber confesses that he will do his 100% to make this relationship and marriage work. He even has thought about their 70s. The 21-year-old model Hailey Baldwin is quite the stunner. Pic credits: Elle.com

Justin even remembered how many days he was in a relationship with Hailey Baldwin. The proposal has been made on the ‘seventh day of the seventh month,’ and this truly says something about his commitment. It is also surprising to see Justin Bieber getting quite religious quoting verses from the Bible as well.

Now the couple is back in New York and Hailey does not shy away from flaunting her new jewelry around town.

Justin and Hailey in NY after engagement

Earlier when the rumors broke out, there was a massive backlash to the couple. But seeing as the story is true, more and more wishes are flowing their way. 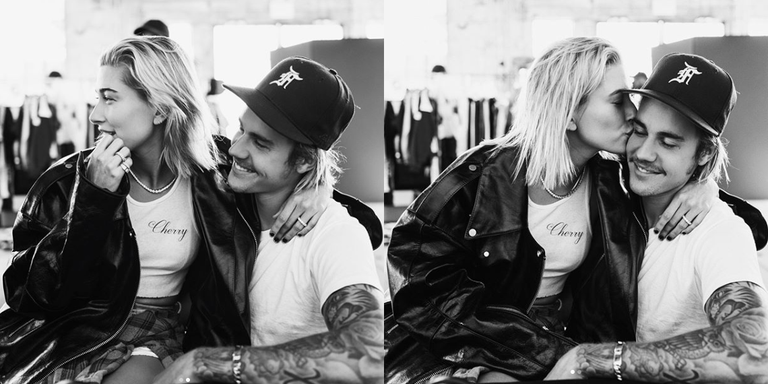 Join us to wish Justin Bieber and Hailey Baldwin a happy life ahead!