November 2018 is going to be a special month for Queen fans, Rock music fans and music fans in general, as an almost Freddie Mercury will be taking us on the journey of Queen in the upcoming biopic ‘Bohemian Rhapsody.’ The movie title is derived from possibly one of Queen’s most controversial and memorable songs and #166 of the greatest songs of all time as per The Rolling Stones 500 Greatest songs list. You can read our lyrics breakdown of the song to understand why!

Rami Malek will be transformed into the real-life character of Freddie Mercury, who was a man so full of character and personality. 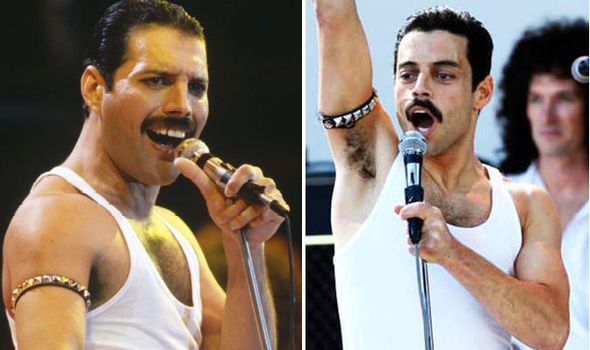 The new movie is to take us on a wild journey of Freddie Mercury and his ‘band of misfits’ forming Queen, their struggles, rise to fame, Freddie’s personal life and the final reunion performance at Live Aid in 1985.

Mr. Eden – “So tell me what makes Queen any different from all of the others who want to be rock stars, I mean?”

Freddie Mercury – “Tell you what it is Mr. Eden, we’re four misfits who don’t belong together, paying for other misfits in the outcasts, right in the back of the room. We’re pretty sure they don’t belong either. We belong to them”

Freddie Mercury’s homosexuality which affected other’s view of his musical career is also given prominence in the upcoming movie. In the trailer, we see a brief squabble between the band members with Freddie over this matter, which may have affected their musical progress. And Freddie was suffering from a terminal illness of bronchial pneumonia resulting from HIV/AIDS.

Amongst these complications, Queen members took the stage at Live Aid in Wembley Stadium in 1985 and delivered one of the most epic live performances ever in Rock and music history.

“We believe in each other, and that’s everything” – Freddie Mercury about Queen

This movie is going to be an absolute thriller and the current living members of Queen-Brian May and Roger Taylor are going to have a serious run down in their memory lanes in early November.

Let us know your thoughts on this movie and Freddie Mercury in the comments below.